Home / Gambling News / The Kambosos vs. Lopez Rematch Could Happen at 140 Pounds 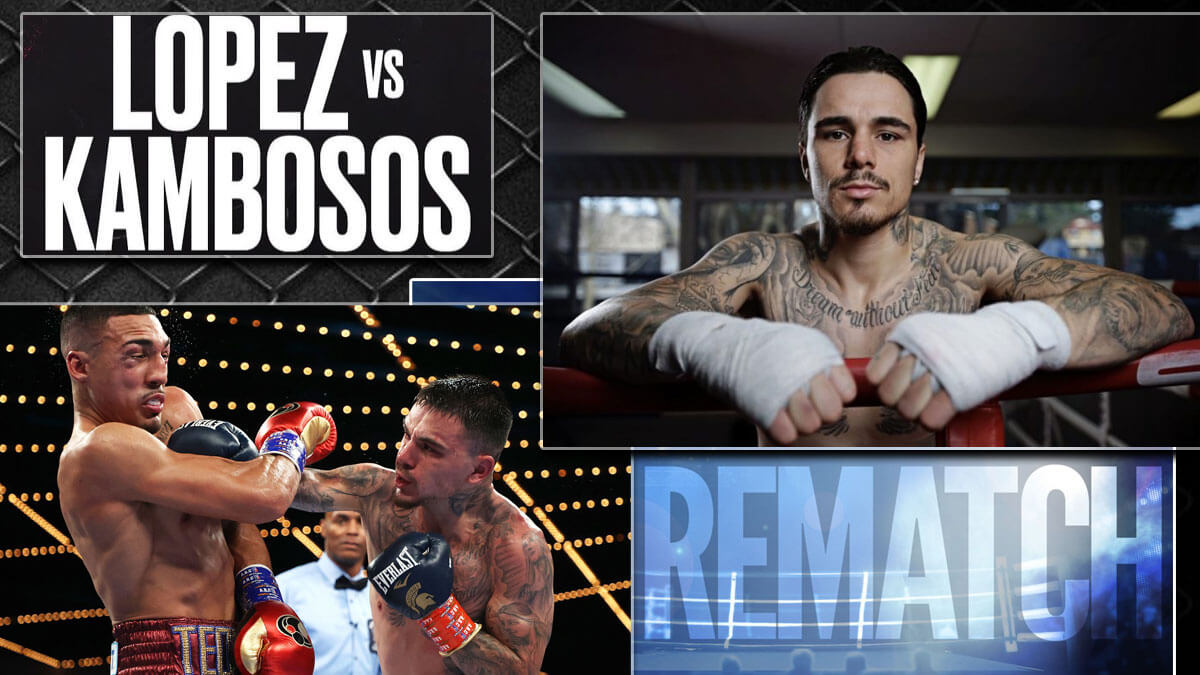 Late last year, George Kambosos Jr. pulled off one of the biggest upsets in recent boxing history by earning a split decision win over Teofimo Lopez. Since then, both men have talked about another bout taking place in the future. New reports indicate the Kambosos vs. Lopez rematch could take place at 140 pounds later this year.

Teofimo Lopez has blamed the loss to George on several different factors. Many would be interested to see if the fight taking place at a different weight would affect its outcome.

Here’s what you need to know about this possible matchup!

More Rumors of the Kambosos vs. Lopez Rematch are Surfacing

Boxing’s lightweight division is filled with more elite fighters now than ever before in history. Prior to November of 2021, many felt that Teofimo Lopez was on his way to becoming the most dominant champion the division had seen in many years. It was that month that he took on George Kambosos Jr. in the first defense of his numerous world titles won against Vasyl Loachenko.

Nearly all online sports betting sites listed Lopez as a massive betting favorite leading into fight night. Teofimo is a ferocious power puncher with very good countering skills. Kambosos was not intimidated, however, and managed to win the back-and-forth war via split decision.

Many fans immediately called for a rematch between these men. Lopez seemed to have other plans, telling the media he planned to move up in weight after the loss. It now appears the Kambosos vs. Lopez rematch could take place at 140 pounds. George spoke about this possibility to the media earlier this week.

“If you want to fight again let’s fight again. Come see me in my hometown now,” said Kambosos Jr. “I’m always open to doing big fights. We’ll see. We could do it at 140 no problem. I spar middleweights, so what do I care? Weight is no issue for me. So, we’ll do it forever, but I said this can go two ways for him,” said Kambosos about him being willing to fight Teofimo at light-welterweight. You can either bounce back like a champion and we’ll have to wait and see or you go down a bad road, which I think could be the case now.”

Of course, George Kambosos Jr. already has a different opponent in his way before another fight with Lopez could come together. Let’s look at how the new champion matches up with his next opponent.

Breaking Down the Odds on Kambosos vs. Haney Online

Many boxing fans around the world were disappointed to hear that Teofimo Lopez was choosing to depart the lightweight division. There are plenty of other competitors fighting at 135 pounds, though. Two of the best fighters in this weight class are set to compete this June in a massive bout with multiple world titles on the line.

George Kambosos Jr. will be putting his belts on the line against the current WBC lightweight champion, Devin Haney. Fans around the world are already looking forward to betting on how this fight might play out. BetOnline is now providing its members with some fantastic odds on this upcoming title fight.

George Kambosos Jr. is entering as the +150 underdog. He is an extremely technical fighter and showed major heart in his recent bout against Teofimo Lopez. Some feel his speed and power will be enough for him to pull off yet another major upset.

Devin Haney is one of the slickest boxers in the lightweight division. He has phenomenal defense and rapid-fire combinations. The oddsmakers seem to feel those skills will allow him to win, as he is entering this bout as the -180 favorite.

This fight has huge implications for the lightweight division. The winner will be well on their way to becoming the unified champion at 135 pounds. Stay tuned for an in-depth betting breakdown of this fight as it draws closer!

It may be many months before the Kambosos vs. Lopes rematch comes together. Much of that depends on how the upcoming bout between Kambosos and Haney plays out. Fortunately, boxing fans have several very exciting fights to look forward to this weekend.

Tomorrow, one massive fight between Drew Brown and Sam Gilley is slated to take place in England. Brown (+475) is undefeated as a professional and has several impressive knockouts to his name. He will need to have the performance of his career to get the win over Sam Gilley (-750), a knockout puncher with a 13-1 record.

On Saturday, another massive fight between Conor Benn and Chris Van Heerden is slated to go down. Benn (-1900) is coming off a knockout win over Chris Algieri and appears to be one of the top prospects out of the UK. Van Heerden (+950) is a very experienced boxer looking to prove he can still beat the young up and comers in the sport.

Make sure to head over to BetOnline today to check out all of the odds for the big fights taking place this Saturday. Feel free to take a look at this betting preview for the UFC’s main event this Saturday, too.

Are you interested in seeing the Kambosos vs. Lopez rematch? How do you see that fight playing out? Let us know in the comments section below!

The post The Kambosos vs. Lopez Rematch Could Happen at 140 Pounds appeared first on GamblingSites.ORG.