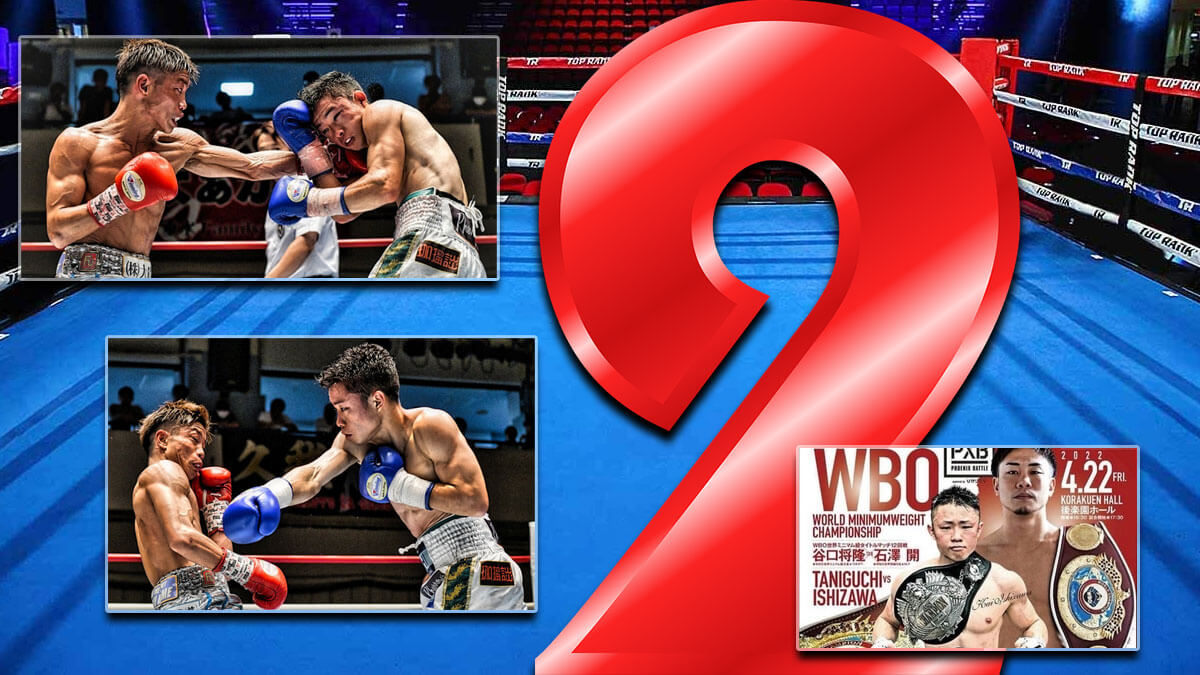 An epic strawweight rematch is slated to take place this Saturday night. Masataka Taniguchi will be looking to earn another victory over Kai Ishizawa, yet a world title will no longer be on the line. Today, I’ll be providing an in-depth Taniguchi vs. Ishizawa betting preview, highlighting what both fighters can do to get their hands raised.

Many were disappointed to hear Ishizawa missed weight for this bout. Questions linger over how serious he took the training for this bout.

Here’s what you need to know about this matchup.

Final Odds on Taniguchi vs. Ishizawa

Japan continues to produce some of the best and most exciting fighters in the world. Masataka Taniguchi and Kai Ishizawa are set to compete this weekend in Tokyo. Prior to the fight’s weigh-ins, the WBO strawweight title was on the line.

Kai Ishizawa failed to make weight for this upcoming bout. As a result, he is no longer eligible to win the WBO title.

More fans are interested in betting on how this fight will play out. Below is a look at the odds on Taniguchi vs. Ishizawa, courtesy of BetOnline.

These odds will make sense to most bettors. As many are noticing, neither man is a huge betting favorite. This is somewhat rare in high-level boxing and goes to show how competitive most analysts expect this fight to be.

Masataka Taniguchi is a hugely popular fighter riding a four-fight win streak. He also holds a win over Kai Ishizawa dating back to 2019. That victory over Kai likely explains why he is coming into this bout as the -300 favorite.

Kai Ishizawa has looked incredible since his loss to Taniguchi in 2019. He is a serious knockout puncher with three TKOs in his past four bouts. Missing weight never looks good and Kai is entering this upcoming title fight as the +240 underdog by all online boxing betting sites.

Many will be surprised at the over/under odds for this bout. Despite both fighters being elite knockout artists, the oddsmakers are favoring the over in this fight. No one should be surprised if this bout ends in a knockout, though.

Comparing odds was an important aspect of his Taniguchi vs. Ishizawa betting preview. Now, let’s look at what these fighters need to accomplish in order to get the victory.

There are a million factors to consider when making a prediction on a championship boxing fight. Statistics can help to reveal certain advantages that a fighter possesses. Of course, the best way to predict a fight is to compare their skills and fighting styles.

Fans may be disappointed to hear that a title will not be on the line due to Ishizawa’s weight miss. That does not mean this fight will be any less exciting. Both men will still be looking to earn a knockout and most are expecting a back-and-forth war.

A lot has happened since the first fight between these men. I am expecting an even more competitive bout than the first one. Below is how I see each man approaching this upcoming rematch.

Some fans were writing Masataka Taniguchi off after his loss to Vic Saludar in 2019. He didn’t let that loss affect him, however, going 4-0 since that defeat. Taniguchi is now the WBO strawweight champion and continues to tell the media he fully expects to defend his belt this weekend.

In the first fight with Ishizawa, Taniguchi was able to frustrate his opponent using his lead right hook. I believe that will be his most effective weapon this Saturday night, too. He has serious power with his lead hand and uses it to catch opponents as they come in.

Taniguchi is an aggressive fighter and needs to maintain a solid pace throughout this fight. He cannot let Kai take over the early rounds. Pressing forward and looking to land his powerful counter-right hand will help Taniguchi secure the victory.

Kai Ishizawa is just 25 years old and has already accomplished a lot in his career. Missing weight was a huge blunder and it’s unclear what exactly that means leading into fight night. Kai’s fans are hoping that the recent weight controversy will make him even more aggressive leading into this bout.

Ishizawa needs to push the pace in this bout. That will likely mean meeting Masataka Taniguchi in the center of the ring. He cannot get too overzealous with his aggression, as Masataka will be looking to catch him as he comes in with punches. Aggression was one of the most notable aspects of this fight in forming this Taniguchi vs. Ishizawa betting preview.

There is no doubt that Ishizawa will come out firing in this fight. He should attempt to make Taniguchi tired by landing hard punches to the body. He has a massive left hook to the body and may be able to stop Masataka if he is able to consistently land those shots.

Coming up with this Taniguchi vs. Ishizawa betting preview revealed a lot about both fighters. Based on their styles, I expect this to be a very exciting fight. The winner will likely be who is able to implement their game plans better.

It’s disappointing to hear that a title will no longer be on the line here. I am not expecting this to have an impact on either fighter, though. Expect to see a back-and-forth battle with both men hunting for a knockout.

Several other massive bouts are taking place this weekend. That includes Saturday’s main event between Tyson Fury and Dillian Whyte. Feel free to check out this betting pick for Fury vs. Whyte today!

What do you think of this Taniguchi vs. Ishizawa betting preview? How do you see this fight ending? Let us know in the comments section below!