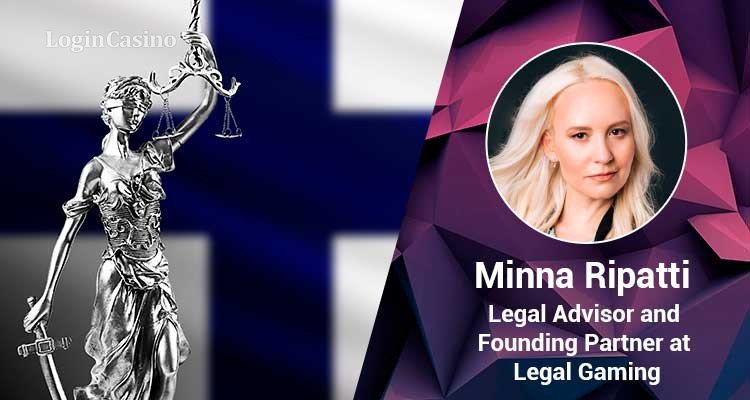 Minna Ripatti is a Finnish iGaming lawyer and economist, who has lived years abroad, both in Austria and Malta, but has recently returned to her home country, Finland. The expert has told Login Casino readers about the current reform, which is taking place in the country.

Get the latest information on the legal aspects of the gambling business operation in Finland.

Finland is in the process of amending the Lotteries Act and related acts. What are the core changes expected to enter into force in 2022?

Yes, the legislative process is currently pending in Finland. The Draft Government Proposal to Parliament on Amendments to the Lotteries Act and certain related acts (hereinafter “Amendments”) was notified to the EU Commission on 23rd of April, meaning that the three-month standstill period is expected to end on 26th of July. The Amendments, which concentrate on securing the existing monopoly system and aim at assisting in the fight against gambling activities in violation of the Lotteries Act, include the following key points:

Stricter regulation on marketing. The provisions on marketing are being specified to a certain extent by introducing new restrictions on the content and ways of permitted marketing. In addition, the marketing of certain particularly harmful gambling games will be prohibited. However, the most interesting part of the Amendments is that provisions have been added to the extension of the decision to prohibit the marketing of gambling services in violation of the Lotteries Act to natural persons and to the imposition of administrative penalty payment for engaging in marketing activities violating the Lotteries Act.

PSP-blocking. PSP-blocking measures are being introduced. The supervising authority, National Police Board, would maintain a blacklist of gambling companies that target marketing in mainland Finland and whose payment transactions with banks and other payment service providers should be blocked.

According to the proposed Amendments, the PSP-blocking measures would be based on a so-called “block list” maintained by the National Police Board. This so-called “block list” would include those gambling entities, which would direct their marketing to mainland Finland and which the Police Board would have found to be marketing gambling in violation of the Finnish Lotteries Act.

In addition, a condition for entry on the “block list” would be that the National Police Board pursuant to the Lotteries Act, had prohibited the said entity from carrying out its gambling activities in Finland. The Amendments provide for a general prohibition on payment service providers not to execute or initiate payment transactions in which the payee or payer is a gambling entity entered on the “block list“. The planned amendments will also give the National Police Board the authority to prohibit a payment service provider from executing or initiating payment transactions.

B2B activities of Veikkaus. The Amendments would allow the Finnish monopoly operator, Veikkaus, to establish a subsidiary for the provision of B2B services to other companies. In practice, this would mean Veikkaus selling various products and services, including the games it has developed in-house, to foreign iGaming operators. The subsidiary would only be allowed only to offer services “other than gambling” and not to the general public.
Compulsory identification. The identification of slot machine players became compulsory from the beginning of 2021. The identification requirement would start to apply to other gambling games by the beginning of 2023 at the latest and to scratch cards at the beginning of 2024.
Placing of slot machines. In the future, the location and use of slot machines should be planned in a way that the harm caused by gambling is being minimized. When placing slot machines, particular attention should be paid to the harm that gambling causes to minors and vulnerable persons.