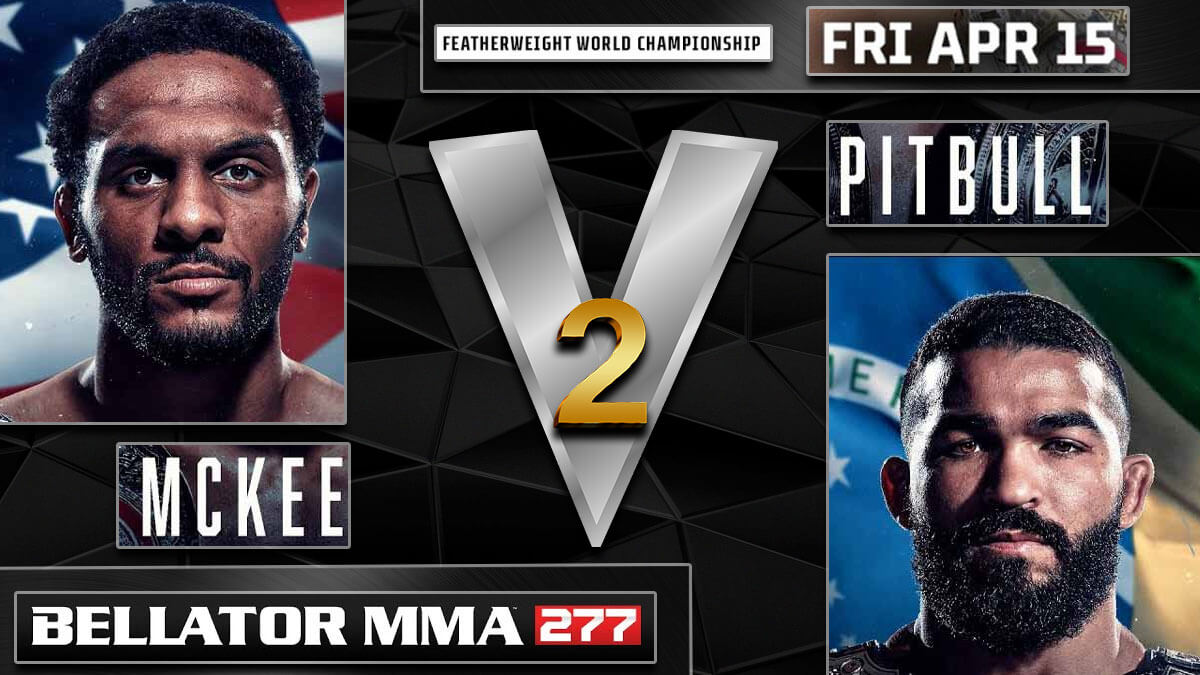 Two of the most popular fighters in Bellator MMA are set to compete this weekend! AJ McKee is looking to earn the first defense of his featherweight title against an old rival, Patricio Pitbull. Today, I’ll be offering readers an in-depth McKee vs. Pitbull 2 betting pick with a close analysis of how these fighters stack up against one another.

This is a huge fight for Bellator’s featherweight division. The rest of this entire card is loaded with world-class matchups, as well.

Here’s what you need to know about this weekend’s massive main event.

Here’s How to Bet on McKee vs. Pitbull 2 Online

Bellator’s featherweight division has long been its best and most competitive weight class. All of the fighters in the promotion’s 145-pound weight class are elite. AJ McKee moved up the rankings over the years and won the featherweight title last year with a submission win over Patricio Pitbull in the first round.

Many now feel that McKee is one of the best featherweight fighters on the planet. He is skilled everywhere and is still just 27 years old. Many fans are curious to see if Pitbull can put up a better fight in the rematch this Saturday.

Anyone interested in betting on McKee vs. Pitbull 2 online should head over to BetOnline. This online sportsbook is known for providing some of the best MMA odds of any online sportsbook. It is providing its members with fantastic odds on the entire Bellator 277 card on Saturday.

The moneyline odds for all of these fights are excellent. Some great prop betting odds are being offered on this matchup, too. These odds allow members to wager on many different individual aspects of the fights on this card.

There is no reason to have concerns about safety here. Fans have access to a huge variety of options to deposit and withdraw their funds. That includes traditional bank payments and crypto payments with low fees and quick transaction times.

Just about any fans looking to come up with a McKee vs. Pitbull 2 betting pick will love this website. It provides everything fans could need to bet on this fight and the others on the card.

Some excellent odds are being offered on this fight. Below is a look at these odds, courtesy of BetOnline.

A huge number of questions surrounded the first fight between AJ Mckee and Patricio Pitbull. At that time, fans did not truly know how good McKee was. He shocked fans by scoring a first-round victory over Patricio to capture the featherweight title.

There is no doubt that the first fight had an impact on the odds for this rematch. Below is a look at those odds, courtesy of BetOnline.

All of the fighters in the top-10 of Bellator’s featherweight division. There is no doubt that AJ Mckee and Patricio Pitbull sit at the top of those rankings. Even the best MMA betting experts cannot say with 100% certainty how this rematch will play out.

AJ McKee proved to the world that he is the best featherweight in Bellator by submitting Patricio Pitbull last summer. He has been training since then in preparation for a rematch with Pitbull. The oddsmakers seem to feel he will win, as he is entering as the -300 favorite.

Patricio Pitbull was thought to be Bellator’s pound-for-pound best fighter prior to the loss to AJ McKee last year. He seems hungrier than ever to prove that he is still in that discussion. Nearly all online MMA betting sites list him as the +250 underdog leading into this bout.

Many will be surprised to see the over/under odds for this bout. It seems that the oddsmakers feel there is a good chance that this fight will end early. The over odds here could provide some great opportunities for bettors.

There is a big disparity in the odds here and they are likely to have an impact on how fans form their McKee vs. Pitbull betting pick. Odds are not always right, though. Below is a look at some of the most important numbers these men are bringing with them into the cage.

Breaking down high-level MMA fights is not an exact science. The goal is always to learn as much as possible about two competitors to come up with the best predictions possible. Part of that means looking at the most important numbers two men bring with them into a fight.

Each of these men brings some interesting advantages into fight night. Below is a look at some of the most important statistics they possess.

Betting experts love to debate the efficacy of comparing statistics like the ones above. They will not reveal exactly how a fight will play out in any meaningful way. Instead, they help to highlight the clearest advantages that fighters bring with them into the cage.

No one can deny that AJ McKee holds the physical advantage leading into this fight. He is just entering his fighting prime at 27 years old. McKee has a four-inch height advantage over Pitbull and has a staggering 8.5-inch reach advantage.

The experience edge goes to Patricio Pitbull in this fight. He has fought 19 more times than McKee as a professional. Patricio also has a very impressive record of 32-5 with wins over many elite fighters including Michael Chandler, Emmanuel Sanchez, and Henry Corrales. Despite that advantage, all online sports betting sites list him as the major betting underdog leading into fight night.

Both of these men have impressive finishing rates. Their first bout ended very quickly and there is reason to believe the second will, too. It’s also incredible to see the variety of both submissions and knockouts these men have on their records.

Some of these numbers could affect how fans come up with their McKee vs. Pitbull 2 betting pick. There are many different ways this fight could play out, though. Below is how I see each man approaching this massive fight.

AJ McKee entered Bellator with a 0-0 record in 2015. Bellator matchmakers allowed him to slowly move up the rankings, eventually leading to his first title fight last July. McKee passed that test with flying colors and is looking to earn his first title defense on Saturday night.

McKee landed a massive head kick in the first bout that led to a guillotine submission. I expect him to work those same types of kicks in this rematch. He has a massive size and reach advantage and will likely be able to land hard shots from distance all night. A very common McKee vs. Pitbull 2 betting pick is on AJ winning via knockout using these advantages.

McKee cannot let himself get backed up by Pitbull. In boxing range, he is in real danger of getting caught with a knockout punch. He needs to maintain the center of the ring, utilizing strong kickboxing skills while avoiding the boxing and grappling of Pitbull.

Patricio Pitbull proved himself time and time in Bellator’s featherweight division. He is a massive power puncher with very dangerous submission skills. He got caught early against McKee in their first bout and likely learned a lot from that loss. Patricio seems very fired up for this bout and engaged in a heated war of words with AJ during their recent press conference.

In this rematch, Pitbull needs to push forward, rather than staying at kicking range against Patricio. If he can get inside McKee’s punching range, he can certainly knock him down and finish him. That means being able to get past AJ’s kicks.

McKee may look for takedowns in this bout. If he does, Patricio should immediately threaten with guillotine chokes. This will make AJ think twice about shooting for legs and may even lead to Pitbull securing the choke for the win.

This Saturday’s main event is expected to be a good one. The fact that McKee vs. Pitbull 2 is the main event of this card over the Nemkov vs. Anderson fight shows how much fan interest surrounds it. Millions of fans are looking to bet on how this fight plays out.

Forming my own McKee vs. Pitbull 2 betting pick was not exactly easy. I believe this rematch will be far more competitive than the first fight was. I eventually came to the conclusion that one fighter has more advantages leading into fight night.

Check out my official prediction below!

AJ McKee won the first fight with Pitbull very easily. I expect this rematch to be far more competitive. Using his kickboxing and wrestling, AJ should be able to control the action enough to be awarded the victory via unanimous decision.

This scenario could offer fans that bet on the over some big opportunities to win big. I feel that Patricio will have a much better game plan that allows him to survive for all five rounds. I simply do not feel he will be able to catch AJ with a shot that leads to a finish.

AJ McKee is well on his way to being named the best fighter in Bellator MMA. Another win over Patricio Pitbull will help him to accomplish that goal. My own McKee vs. Pitbull 2 betting pick is predicting he does exactly that.

Head over to BetOnline today to check out a full list of odds for UFC 277. Don’t forget to look at the unique prop betting odds for this matchup. Feel free to take a look at my pick for the UFC’s main event this Saturday night here, too!

What do you think of my McKee vs. Pitbull 2 betting pick? How do you see this title fight ending? Let me know in the comments section below.