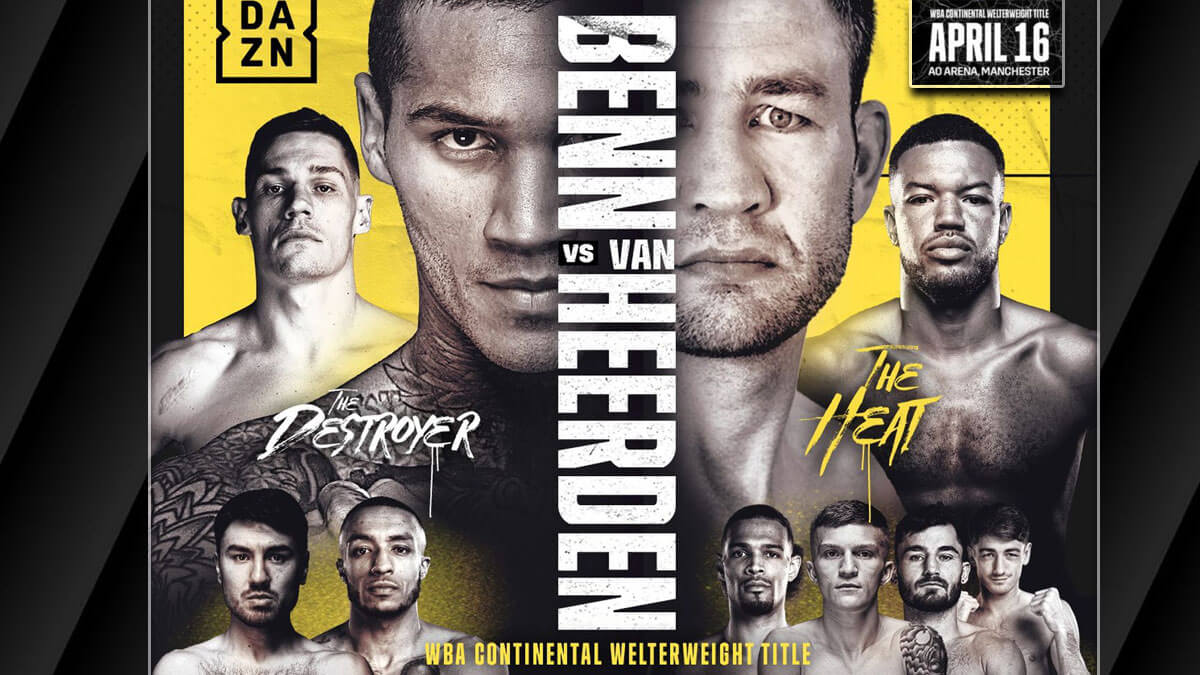 Two elite welterweight boxers are set to meet in the ring this weekend! Conor Benn will look to add to his undefeated record against a tough, crafty veteran in Chris Van Heerden. Today, I’ll be providing an in-depth Benn vs. Van Heerden betting pick with a close analysis of how these men stack up with one another.

Conor Benn and Chris Van Heerden are two very elite fighters with a lot to prove. Fans and analysts are expecting a tactical battle between these two elite competitors.

Here’s what you need to know about this matchup.

A new wave of exciting young welterweights are making their way through the rankings right now. That includes Conor Benn, a 25-year-old with a huge number of impressive knockouts on his resume. On Saturday, he’ll be taking on Chris Van Heerden in a defense of his WBA Continental welterweight title.

A growing number of fans are interested in betting on how this fight plays out. Below is a look at the odds for this massive fight, courtesy of BetOnline.

Both of these fighters are very elite and have wins over fantastic opponents. It’s not a massive shock to see one of these men coming in as the massive favorite, though. These odds are presenting some unique betting opportunities for fans.

Conor Benn is coming in as the -2000 favorite. He is undefeated at 20-0 with 13 of his wins coming via knockout. Most recently, he scored a one-punch knockout win over former titleholder, Chris Algieri.

Chris Van Heerden is entering this matchup as the +1000 underdog. He is a very experienced opponent with a smart, technical style. Chris has been inactive lately, which could explain why all online sports betting sites list him as such a large underdog in this bout.

The over/under odds for this bout are very interesting. It seems the oddsmakers feel there is a very good chance this bout will end fairly early. Neither man is easy to finish, however, meaning a decision is not out of the question.

These odds will likely affect how many fans form their Benn vs. Van Heerden betting pick. Before throwing any money down, however, let’s take a look at some of the most important numbers these men are bringing with them into the boxing ring this weekend.

It’s always fun to watch a talented young prospect taking on an experienced veteran. Conor Benn seems to have the skills to become a major world champion in the future. A victory over a talented veteran like Chris Van Heerden will only help to solidify that idea.

Comparing statistics can be a fantastic way to form a more accurate fight prediction. Below is a look at some of the most important numbers these men are bringing with them to fight night.

Numbers like the ones above certainly do not reveal everything about a fight. Instead, they help to highlight some of the most notable advantages that fighters possess. Both of these men have some clear advantages based on these figures.

The physical edge is leaning toward Chris Van Heerden in this bout. He has a one-inch height advantage and a two-inch reach advantage. That will be very helpful for a man that prefers to stay on the outside of his opponent’s range.

The experience advantage is leaning toward Chris Van Heerden, as well. He has fought twelve more times than Conor Benn and has lost just twice as a professional. That experience edge was not enough for any online boxing betting sites to list him as the favorite, though.

There is no doubt that Conor Benn is the more effective knockout artist. He has earned 13 knockout wins out of 20 career victories. He seems to be getting more effective at landing knockout shots, as well.

None of these figures were enough to sway my Benn vs. Van Heerden betting pick. I feel that the man that comes in with a better game plan will be the one to get his hand raised. Below is a look at what I feel they will be looking to accomplish on fight night.

I believe that Conor Benn has the potential to become a huge superstar in the welterweight division. He is a massive power puncher with improved defensive skills. He seems very confident coming into this bout, telling the media he is already targeting a future bout against Yordenis Ugas later this year.

Benn will need to be aggressive in this fight. He cannot let Van Heerden use his movement and quick combinations to steal rounds. Fortunately, he faced a very similar opponent last December in Chris Algieri.

In that bout, Conor Benn managed to utilize his massive right hand to finish Chris in the fourth round. I believe he will look to do the same on Saturday by getting Van Heerden against the ropes. If he is able to maintain his aggression, the likelihood of him scoring a knockout goes up considerably.

Chris Van Heerden has been one of the best welterweight boxers in the world for years. As many are pointing out, he has not fought inside the ring since 2020. That long layoff could be why so many fans’ Benn vs. Van Heerden betting pick is going against him.

Van Heerden needs to utilize good side-to-side movement in this bout. He does not want to get pinned against the ropes with a power puncher like Conor Benn. Chris has very quick combinations and can fluster Conor Benn using his movement and hand speed.

Chris Van Heerden should do his best to drag Conor Benn into the later rounds. He has the experience and movement to accomplish that goal. If he is successful with that strategy, this is a fight he can certainly win.

This fight has the potential to reveal one of the most exciting young contenders in the welterweight division. It could also prove that Chris Van Heerden has plenty of gas left in the tank. I went back and forth coming up with this Benn vs. Van Heerden betting pick, seeing clear ways for both men to get their hand raised.

This should be an excellent fight from start to finish. Check out my official Benn vs. Van Heerden fight prediction below!

Conor Benn will prove that he is truly elite on Saturday night. I expect him to maintain constant pressure on Chris Van Heerden, looking for an opportunity to rock him with a punch. In the seventh round, he will find that shot and should finish the fight with a flurry of punches.

This will be a breakthrough fighter for the 25-year-old. A win over Chris Van Heerden will prove that Conor deserves a shot at a major world title. There are plenty of exciting champions he could face off against later this year.

Some fans may push against my Benn vs. Van Heerden betting pick. It would not be a shock to see the experience and movement of Chris allowing him to earn the victory. I believe this is Conor’s time and he should prove that with a stoppage victory.

Make sure to head over to BetOnline today to find a complete list of odds for this bout. The prop betting odds for Benn vs. Van Heerden are fantastic. Feel free to check out this in-depth betting pick for the UFC’s big main event on Saturday, too.

What do you think of my Benn vs. Van Heerden betting pick? How do you see this fight playing out? Let me know in the comments section below.