The firm, listed on the ASX stock exchange, achieved revenue of $91.6m for the full year, finishing June with a cash balance of AUS$87.6m and Q4 revenue ‘in excess’ of $100m.

Additionally, in the final quarter BetMakers recorded total customer receipts of $26.2m during April-July 2022, a 23% increase on the previous quarter and a 194% growth rate on the year prior.

Full year operating costs, meanwhile, stood at $35.6m – distributed among ‘non-recurring and accelerated operating costs’ at $4m, property, plant management and equipment at $16.7m and other investments at $15m.

Looking at half year revenues, the group achieved H1 earnings of $45.3m, representing a growth rate of 10.8%, and H2 income of $48.1m, a growth rate of 306.3%, with its Global Tote service recording the most prominent results. 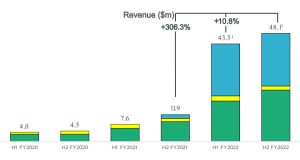 Revenue from the Global Tote reached $23.2m during the first half and $23.5m during the second, driven by 10 year exclusive agreements with Norway’s Norsk Rikstoto state-backed tote provider and New Jersey’s Monmouth Park racecourse.

Additionally, a contract with Caesars Entertainment in June enabled entry into the Iowa sports betting and racing markets, coupled with deals with off-track businesses in Puerto Rico, Peru, Chile and Suffolk.

Global Tote revenue was followed in scale by BetMakers’ Global Racing Network income, with revenue of $2.3m during H1 and $1.8m in H2, bolstered by ‘enhanced integrations’ with UK and EU operators.

This division also found success in North America, partnering with Penn National Gaming to support the American firm’s operations outside of the US and Canada as well as a 15 year exclusive agreement with Monmouth Park and the New Jersey Thoroughbred Horsemen Association.

Lastly, the group’s Global Betting Services unit recorded H1 revenue of £18m and H2 revenue of $22.9m, having added eight new clients during the latter to reach a total of 18 customers in the Australian market.

Looking ahead to the next trading year, BetMakers plans to launch its Global Tote Hub to ‘drive connecting existing and new tote customers’ and continue the US rollout of this division, in particular its BetLine terminal hardware.

For the Global Racing Network the group also seeks to maintain stateside development in New Jersey whilst setting the goal of exporting ‘more than 12,000 races into the international markets’ for its US operator partners such as Penn and racecourse clients including Monmouth Park, Kentucky Downs and Century Downs.

Finally, for its Global Betting Services, BetMakers plans to on-board a further nine platform operators during the forthcoming first half and expand its Next Generation software’s US operations, alongside using the latter to launch an NTD platform in Australia.